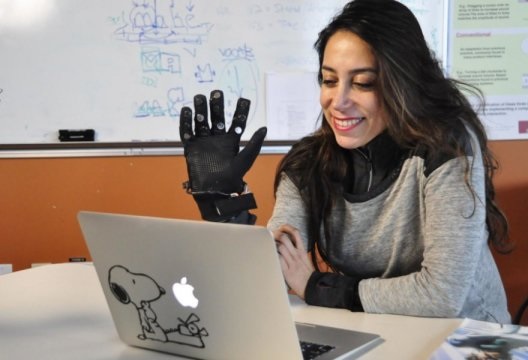 A team of researchers at the Simon Fraser University in Surrey are developing solutions that tackle this issue of making connections between two people who are distances apart. One of them is a pair of interconnected gloves they call Flez-N-Feel. When one glove is used, any action it makes is transmitted to the other glove worn by a remote partner. The gloves come with tactile sensors that allow wearers to “feel” the movements and gestures.

The sensors of the Flex-N-Feel are attached to a microcontroller and provides a value for each bend. Using a Wifi module, the action is transmitted to the receptive glove as a feeling. The sensors are strategically placed on the palm side of the fingers so wearers can feel the touch better. There is also a soft switch on both gloves to allow either partner to initiate the touch.

According to Carman Neustaedter, an associate professor in SFU’s School of Interactive Arts and Technology (SIAT), “Users can make intimate gestures such as touching the face, holding hands, and giving a hug. The act of bending or flexing one’s finger is a gentle and subtle way to mimic touch.”

The developed gloves are currently just a prototype but further developments and testing are underway. Neustaedter says that the next pair of gloves will be able to allow both wearers to share touches with each other at the same time.

With long distance relationships becoming more common nowadays, it is important for couples to find ways in order to maintain that feeling of physical intimacy with each other, even when apart. “If people can’t physically be together, we’re hoping to create the next best technological solutions,” Neustaedter further added.