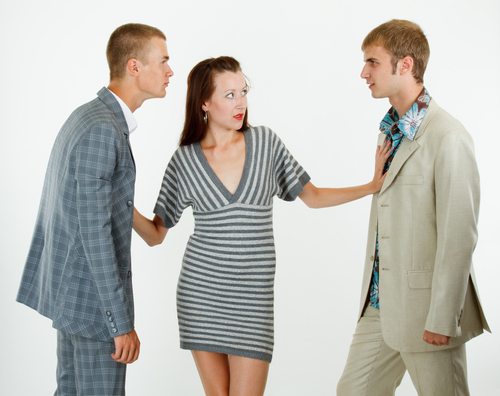 Is It Ever Okay for a Guy to Be Jealous?

Most of the time I see jealous and overly possessive guys driving their girlfriends away. They appear to be controlling and insecure.

But, then again, if you don’t act jealous at all, you look like you don’t care. Sadly, I’ve seen women admit that it’s nice to know that their guy is a little jealous or possessive of them.

This article is written by Rich Santos and I couldn’t help but want to put my two cents in. The answer is that women want to know that you find them so valuable that you are the man who will fight for them! I don’t necessarily mean getting in a fist fight unless the circumstance calls for it. But what I really mean is, women want a man who will protect the relationship. This means a couple of things.

1. He needs to establish respect from her in the relationship, he does this by communicating what bothers him and what he is willing to put up with. – When a man has established respect from his girlfriend, she will do her best to make sure that he does not get jealous and will want to make him very secure by letting him know how much she does care for him.  Basically a girl who respects her boyfriend will make a conscious effort to make sure she is not acting or letting herself get into situations that could possibly make her boyfriend jealous.

2. He needs to show that he is respectful of her and her desires. This looks like a man who does not swollow her life just because he is too insecure for her to have some independence.

The perfect balance is a man who is reasonable with his jealousy. A little jealousy is always Hot but too much goes in the direction of control and abuse. I always tell people to check their heart. Why are you feeling this way?  If you can answer that question and it not be from a selfish desire then go for it. Let her know that she may not hang out with her super hot ex boyfriend. She will actually appreciate the sensible demand!

Dating Coach Dating Tips Dawn Donohoo Jealousy
Share !
Previous: Things To Avoid On A First Date
Next: If a Long Term Relationship Ended in the Past Six Months