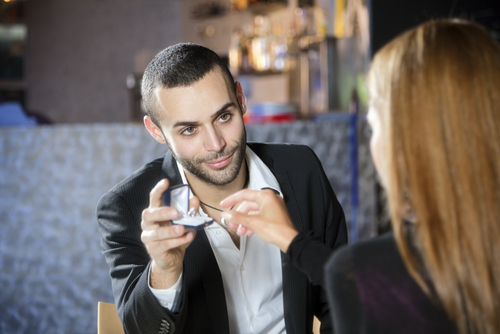 Not all relationships end in marriage. Sure, you are in a relatively great relationship but somehow you just know that it’s not going to last.

Yet your partner is not aware of this–he gets down on his knees, takes out a ring, looks at you with a nervous, hopeful lovesick look and say "will you marry me?". What’s a girl to do?

Refusing a marriage proposal is one of the hardest things you can do in a relationship, and there’s nothing you can do but say "no" kindly and gently.

If you are in private (your house or his), consider yourself fortunate that you won’t have to decline his proposal in front of a number of people and bruise his already beaten ego. When (or even before he pops the question and takes out the ring, look at your guy and tell him in the nicest way possible how you feel. If he wants you to know how he feels, then let him.

There’s nothing you can do now except to tell him the truth. Let him know that you aren’t ready for a serious commitment. Tell him how you feel about him (both the good and the bad).

If, in the process of telling him your positive and negative feelings for him, you change your mind about continuing your relationship or seeing him in the future, do not tell him just yet. Your refusal is already enough for him to deal with at the moment.

If you are in public, such as a restaurant, you should not say much. Ask him if you can go somewhere private to talk. Unless he is dense, he would know right away that your answer is no. but at least he won’t be humiliated.

Go home or somewhere else. Once you get there explain your feelings and your reasons why you can’t marry him – right now or ever.

The moments following the rejection can sure be awkward. If you want to continue your relationship, it is best to stay with him for a while just to let him know that you are still interested in him.

In the next few days or weeks after the rejection, it’s best not to mention what happened. He is still feeling vulnerable so shower him with love and affection. Show him that just because you don’t want to get married now, it doesn’t mean there’s no chance for the two of you in the future.

Finally, if you feel guilty about breaking his heart (perhaps for now), don’t. What you did was wise and considering the high divorce rates and incidence of infidelity, you actually saved you and your partner from becoming another statistic.

You can tell a lot about a guy’s personality by the way he handled the rejection. You might even see a side of him you’ve never seen before. You can decide if you want to continue seeing him or not based on his reaction to your refusal.

If he decides to break off the relationship, then go with it. After all, you broke his heart. Don’t worry, you will always meet another guy, perhaps the one you will definitely share your life with.

Share !
Previous: Cheap Holiday Gifts for Your Date
Next: How to Flirt Using Body Language