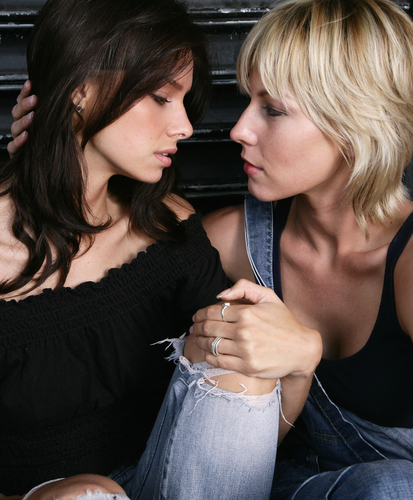 Straight people go for the opposite sex. Gays go for the same sex. Bisexuals enjoy the best of both worlds. But what about those who are sexually and romantically drawn to straight and bisexual men and women, gay guys (top and bottom), lesbians (butch and femme), transgender, transexual, and anyone in between? Can we call them trisexual, quadrisexual, or multisexual?

The continuum of human sexuality traditionally includes only those whose sexual orientation is either heterosexual, homosexual or bisexual. But the dissolution of gender and gender identities in the postmodern society gives rise to a small but vocal movement of people who place themselves within the “pansexual” identity. People who identify themselves pansexual also use the terms “omnisexual” and “anthrosexual”.

The traditional mainstream society accepts and promotes concept of binary gender – that is, we can all be categorized strictly as being either male or female. The dominant system forces into sexual and societal roles based on this binary.

As a concept, it suggests that society is composed of only two types of people: male and female (specifically, straight men and straight women). Thus those who don’t fall within the bounds of this concept are considered “outsiders.” The reality is, many people don’t fall into the distinct male-female binary. This leads to the discourse on homosexuality, bisexuality, transexuality, transgenderism, queer, and pansexuality.

If you’ve ever been actively involved in the LGBT community, chances are you already know who the gays, lesbians, bisexuals, transgendered, and transexuals are. But there are also those people who defy biological and social standard delineations of what makes a gay a gay, a lesbian a lesbian, or bisexual a bisexual.

They are the pansexuals who categorically reject the system of labelling. They acknowledge that the gender spectrum does not only include heterosexuals, gays, and bisexuals but also transexuals, transgendered, intersexed, androgynous, genderqueer, and hermaphroditic.

Pansexuals can be in long-term heterosexual or homosexual relationships. Pansexuality, however, may also lead to a kind of relationship between people who have nonstandard sexuality. For example, a born-male pansexual might be in a relationship with a female-to-male transexual.

Pansexuality is not bisexuality. Although bisexuality is a subset of pansexuality, they differ in that the latter acknowledges the potential for sexual attraction, aesthetic appreciation, or romantic love for not only two sexes. Pansexuals also have the desire to have sex, appreciate, and love those in the further human gender spectrum.

While the Latin prefix “pan-” means “all”, pansexuality only applies to human gender and it doesn’t imply attraction to all people. The term also doesn’t mean that all pansexuals are promiscuous or polyamorous.

Negative mainstream understanding has placed pansexuality alongside fetishes or paraphilias. It must be emhasized that pansexuality does not signify acceptance of paraphilias, as these are totally separate socio-sexual issues.

Share !
Previous: Myths About Meeting New People
Next: Introducing Your Same-Sex Partner to the Family