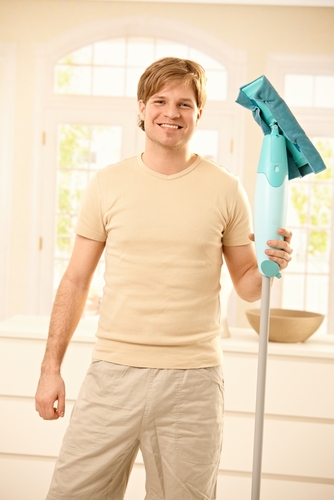 The concept of “choreplay”—that women are more likely to want to have sex when their male partner helps out around the house—is a hot topic in research circles. One recent study from the University of Western Ontario found that wives are happier when their husbands pitch in with housework. Another report from researchers at the University of Illinois at Chicago even suggests men who help clean, take care of their kids, and do other domestic chores may see the benefits of their labor pay off in the bedroom.

When you think about it, these “mop-and-glow” findings make a lot of sense. Researchers in the Netherlands have found that the key to getting a woman turned on and to the heights of orgasmic bliss is a deep sense of relaxation and a lack of anxiety. They scanned the brains of 13 women and 11 men while they were manually stimulated to orgasm by their partners. The scans showed that, for women, the parts of the brain responsible for processing fear, anxiety and emotion slowed down the more aroused they became, producing a trancelike state at orgasm. Men showed far less change in these areas of the brain.

Being a woman, I could not agree with this more. The fact is guys; most women are also bringing home the bacon, but also raising and nurturing the children and keeping up with the domestic bliss of the home. The modern woman in today’s society does not get much of a break. She is busy from sun rise to sun down. I have witnessed over and over men coming home from work and just laying on the couch watching his favorite show, while the wife gets home from one job and continues her day with her second job, that being the house, kids and you. So it is not so far fetched to see how a woman can be turned on by Mr. Clean, when you think about all the stress that  is in her normal day to day routine.

Guys, if you want an awesome sex life, then dress up like Mr. Clean and spice up her life with a man who respects her and wants to please her with the help of a home. You will be rewarded greatly for it!

Signs Your Ex Has Moved On

Be Aware Of These Common Relationship Mistakes