The Perks and Disadvantages of Dating a Supermodel 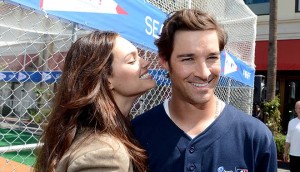 C.J. Wilson, a pitcher for the Los Angeles Angels, seems to be living a beautiful life. He plays on a multi-million-dollar contract with his baseball team and is dating a stunning Brazilian supermodel by the name of Lisalla Montenegro. While dating a supermodel gives a definite boost to a man’s confidence–not to mention the added attention from the public and the press–Wilson says it has its rough times as well.

In an interview with Sports Illustrated Online, the veteran left-hander shares the best and worst things about being in a relationship with a supermodel. Take notes.

Supermodels travel a lot – “Lisalla has to fly all over the place, so sometimes we’ll go a long time without seeing each other.”

The pressure of becoming a wing man for those nosy colleague – “Your teammates asking you if your supermodel girlfriend has any supermodel friends who would date them.”

Learning a new language – Most supermodels are not native English speakers, so it helps to charm your way to her heart using her native tongue.

Being unbothered in a party – “When they walk in a room first, you can be completely invisible. Nobody sees you at all.”

No reservations required – “If they ask for a table at a restaurant, they’re going to get it. We’re always seated right away.”

Keeping up with her physically – “They’re very healthy, so you end up eating well and going to the gym. They help you take care of yourself.”

She wears it better – “She looks way better in any baseball-related clothing than I do.”

People think you are doing something good – “Everybody has an extra level of respect for you when you’re able to to maintain a relationship with a supermodel. When you have the same girl on your arm for a long period of time, people think, “Well, that guy must really have his stuff together or she would’ve left him by now for greener pastures.”