Dealing with a Nerdy Boyfriend 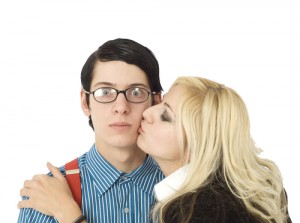 There seems to be conflicting opinions on how a (non-geek) girlfriend should deal with her nerd of a boyfriend.

The first school of thought is that nerdy men have an aversion to change and won’t hear any of their girlfriend’s suggestions to change them (specifically on the looks department).

The other school of thought believes that nerdy men are all for change to please the women they are lucky to be dating.

Aversion to change or not, here are a few things a non-geek girl can do with and/or do to her nerdy boyfriend.

Computers and other geeky activities are not the only things nerds are interested in. Have you watched Beauty and The Geek?

Some nerds in the show are into some fairly interesting activities such as martial arts, art, music, etc. So find a common ground and enjoy doing that activity together. At the very least, you can play computer games together.

If all else fails, a blogger who is married to a nerd suggests pretending to be. It’s may sound a bit mean, but at least you are paying attention, which is necessary in maintaining a relationship.

Gradually is the key word here. Remember the nerd mindset: "I have an aversion to change." Avoid telling him outright that what he is wearing is hideous and that he needs to change into something more presentable.

Do it in such a way that you won’t hurt his feelings. If you are going to, say a formal party, tell him that there is a dress code. He may even appreciate the heads up. You can gradually move on to his hair, facial hair, hygiene (if needed).

Use sex as an arsenal

Nerds, in general have limited sexual experiences (so they say). Put sex on top of his list, or at least as high up as say, programming and online games. It could be a great help to get your nerdy boyfriend away from the PC and spend time with you, or help out with the house chores, or change his nerdy get-up.

Nerds generally have this fascination with girls and all things girly. Coupled with their limited interaction with the opposite sex, nerds are said to be suckers for girl-emotions. Now you have someone who is willing to listen to your emotionality.

Likewise, talk with him about his "traumatic’ past (if he has one). Getting him to open up will make him more committed to you.

Remember that nerds do not have enough confidence with a hottie such as yourself, so stand your ground and stick with your nerd.

Share !
Previous: How to Maintain a Relationship
Next: Does a Long Distance Gay Relationship Work?