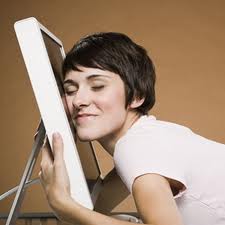 Between the constant “I love my honey sooooo much!!” and “I have the most amazing husband in the whole world!!!” updates, these couples do proclaim too much. Their updates are filled with flowery adjectives and almost always include the words “amazing,” “luckiest,” and “best! ever!” Sometimes the updates are even addressed to each other, like, “Kelly, it was exactly two months ago today I met you and became the luckiest man in the universe!” or “Mark, I loved every amazing second of our beautiful weekend together!!” Don’t these people have personal email addresses? Can’t they actually speak to one another in person and leave the rest of us out of it? But, of course, all these proclamations aren’t for their benefit, they’re for ours. We’re supposed to feel jealous of their burning love for one another and their incredible luck to have found each other. Unfriend!

Outside of their relationship, this couple is miserable and empty. If either of them so much as works outside the home and they’re forced to spend eight hours apart, their updates are peppered with hourly countdowns until their end-of-the-day reunion. If one gets invited to a function without the other, they use their Facebook update to announce how unfair the world is and how nothing else in life is as important as the time they spend with each other. “I have to go to my BFF’s bachelorette party tonight, which means a whole evening without Nick! No fair!!!” How these couples ever managed to survive in the world without each other is one of the great mysteries of life.

Perhaps the biggest offender of them all, this couple hashes out their issues with one another in passive-aggressive, embarrassing, and often melodramatic updates, like “Would have gotten a lot more sleep if somebody didn’t keep me up all night with his constant farting!” or “There’s nothing I hate more than a man who can’t make up his mind which he woman he wants!” Every other day your feed is cluttered with messages that they’ve broken up or gotten back together. At least you can take comfort in knowing that they totally deserve each other.

A few weeks back there was a post on the website STFU, Marrieds that highlighted a Facebook update from a newly married woman who wrote: “Spent last night attempting to ward off the dreaded curse of the honeymoon stage — with gallons of water and a bazillion cranberry pills.” She may as well have written: “Hey guys, I’m having tons and tons of sex! So much sex that I think I’m getting a bladder infection. And in case I wasn’t clear, we’re doing it A LOT — probably even more times than you blinked your eyes all weekend!!!!” The TMI couple clearly has something to prove and that something is the amount of sex they’re having versus the amount you’re not having, you poor soul. Let’s just hope they’re practicing great birth control, otherwise we’ll soon see them on Facebook’s Most Annoying Parents list. Unfriend.

I found this article and died laughing. I actually have a friend on my Facebook that is so annoying, he makes himself look pathetic. He is constantly updating about his relationships. I swear every other month he has a new girlfriend and professes how much he is in love. He even goes as far as to post when he is fighting and begs his girlfriends to forgive him through his Facebook wall.

My advice to everyone is to not make relationship updates. Keep your relationship private. I actually don’t even believe in adding if you are in a relationship or not unless you are married. This will shield you from having to answer if or when your relationship ends. Remember that most people have friends on their friends list that are not even true friends. Do you really want people who do not know you very well to know all of your business? I hope not, only true friends should have a real peak in your life.

Dating Dating Coach Dawn Donohoo Facebook
Share !
Previous: Good Things and Red Flags for the First Date
Next: Which of these dating taboos you talk about with your date?

Getting Ready To Date Again

Good Things and Red Flags for the First Date

Ways To Up Your Pre-Date Confidence

5 Ways to Make That Cheater Pay

Top 10 Reasons for Being — and Staying — Monogamous