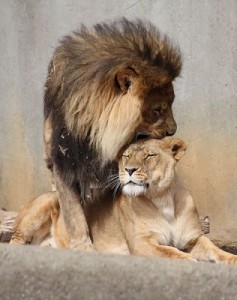 Finding a date in the human environment can be very competitive. Perhaps they should look at how animals do it. Scientists could not help but compare it to how animals behave when it comes to finding a mate. A recently-released study in The American Naturalist has examined how male animals alter their strategies for finding a mate whenever the situation becomes very competitive.

“We found there’s significant flexibility in mating behavior and customs across many species,” says co-author James W. A. Grant, biology professor at Concordia University. Some male animals, regardless of the species, practice similar strategies when faced with the same problems in finding a mate.

If there are way too many males in one area, they can become aggressive with each other. However, some species of mammal, insect, fish, crustacean, amphibian, and reptile, would rather avoid confrontation because it can be too tiring and increased chances of injury. More importantly, other more attentive males may even steal potential mates away while the others get too busy fighting.

“Males may forgo displays of conspicuous courtship and attempt to gain some reproductive success in other ways,” said co-author biology professor Jeffrey Hutchings of Dalhousie University.

So instead of using brute force, men should consider using stealth to outwit other guys. In that way, they can prove to women that they are lovers, not fighters.

Source: The American Naturalist, via Discovery.com