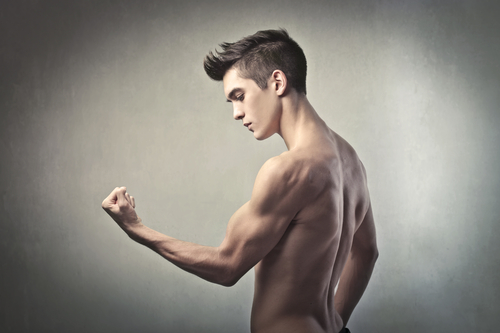 We all know by now how girls face immense pressure to look a certain way, whether it is from the media or each other. A research from NYU’s Child Study Center suggests that girls as early as age nine become aware of how physical appearance affects how they are perceived, and received, by others.

But that does not mean girls are the only ones who have a negative body image. According to the National Mental Health Information Center, more and more boys are reportedly becoming concerned with how they look. The study, which was published in the journal Pediatrics, shows that 40 percent of boys in middle and high school exercise regularly–while 90 percent at least occasionally–with a specific goal of bulking up their physique. Another research published in the British Journal of Health Psychology finds that majority of young men are reportedly feel the pressure of fitting into a certain ideal body type, which is “toned and muscular.”

The finding may seem like how boys are simply feeling the same society’s expectations just like the girls, but research psychologist and gender scholar Dr. Preggy Drexler writes that what is happening is how “old gender stereotypes play a significant role.” She further explains that while people are slowly accepting less rigid gender roles, such as how boys who play with dolls do not necessarily grow up as wimps, the pressure on boys to fit into a certain body type represents a throwback to traditional notions of masculinity.

“The message: It’s fine if boys want to go around wearing sparkly nail polish as kids, as long as they grow up to be big and strong and macho,” Dr. Drexler writes.

Just as with girls, young men have difficulty avoiding the pressures. They see it everywhere, from images of beefed-up guys on reality shows, to Hollywood hunks to Channing Tatum and Taylor Lautner. Some apparel stores even have shirtless young men greeting shoppers as they enter. Even the Ken doll is no slouch.

The reports also show that the biggest pressure for boys to become physically toned comes from their coaches and peers–both male and female. Another factor is the attention they get from girls, thus the desire to compete in becoming the fittest. Despite how often young men would head to the gym just to lift those weights, they reportedly do not want to admit that they do so just to look good.

“That’s because traditional notions of masculinity exclude any interests or traits that could be considered girlish–things like grooming and dieting,” Dr. Drexler explains. “And so while many pre-teen and teen girls take pride in openly preening–whether that means painted nails and perfectly stick straight hair or a carefully cultivated disheveled Goth look–boys have to ‘play tough‘ and stoic.”

Increased awareness of body image among boys is not necessarily a bad thing. For one, it encourages them to eat well, go to the gym, and take care of themselves. However, if this awareness turns into obsession, secrecy, or shame, the results can be dangerous such as taking steroids or adapting eating disorders.

The negative implications also affects boys’ emotional development. “Too much emphasis on fostering masculinity and defining ‘what makes the man’ has significant consequences,” writes Dr. Drexler. Boys who feel pressured to adhere to certain gender roles may grow up with stagnant emotions and violent behavior. Meanwhile, the young men who do not follow strict gender roles grow up to become independent, open-minded, and sexually tolerant.

“A generation of boys becoming more aware of their bodies isn’t bad,” Dr. Drexler concludes. “But working out in pursuit of an outdated notion of masculinity is most definitely not the direction in which we want our sons to be headed.”