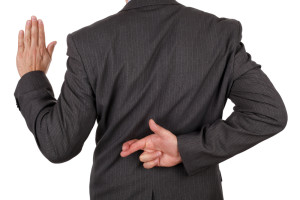 In any relationship, lying is an issue that always gets the most attention among couples. Some people believe that a little lie here and there will not do any harm. But there is always a risk of lies becoming a habit. Eventually it can have a damaging effect the more lies enter into the picture.

In many cases, women have a problem with lying boyfriends. The problem is that it can be very difficult to determine whether the men are lying or not. There are several ways to suspect if boyfriends are lying. Certain words that they use may be associated with not telling the truth. Here are some of them.

It is always important to note that some words may detect lying depending on the context of its usage. When a boyfriend uses the word, “never” instead of “no”, it may be a sign that he is trying to conceal something that he may have done before. One example- if you ask your boyfriend, “Are you ogling at that girl’s breasts?” and he says, “Never” instead of “No”, chances are he’s lying.

This is another word that can detect if your boyfriend is lying, especially if it is followed by a noun. If he says, “that money” or “that girl”, he may be trying to distance himself subconsciously from the object or person. It is either he may be hiding something or trying to stay away from being associated with something that he knows may cause some trouble. Again, the usage and the lie may depend on how the word is used.

This phrase is commonly used to try to steer a conversation away towards another subject. A lying boyfriend may also use it in order to try and minimize the effect of what he may say next. In such cases, try to take note of what your boyfriend will say after the phrase. It may help provide a clue about something that he may be lying about.

This may be something funny to hear, but it may also be an indication that your boyfriend may be lying. If he is someone who is not always using the word when talking to you but suddenly blurts it out of nowhere, it may suggest that he is stressed out and may be in trouble by something he did.

When you hear some of these words from a boyfriend, it is best not to confront them about suspecting any lying. You may need to investigate further before you try to tell him about it. For all you know, it might just create some conflict that is not worth it. Try to make sure you establish all the facts first before making any insinuations on your boyfriend. Do not just base your conclusions on the words spoken. Try to look for added clues in other ways to confirm the lies.

common words lying lying boyfriends spoken words
Share !
Previous: Mistakes To Avoid On Your First Date
Next: Signs That You Are Getting Friend Zoned