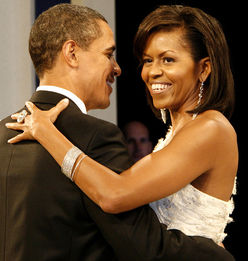 If you are still seeking for that right man who would sweep you off your feet, chances are you are keeping a checklist of what your ideal mean must have. More often than not, you find a great guy, but falls just a tad short on your checklist. Reasons vary such as “he is half-an-inch short from my minimum height requirement,” “he did not study in an Ivy League School,” “he is practicing a different religion,” so on and so forth.

But can you really be sure that the man who gets checks across the board would make you happy for the rest of your life? Can you even find a man who would fit into your ideals?

First Lady Michelle Obama herself thinks you should ditch out that checklist.

Coming from a woman who snagged a guy who eventually became president, those are some word to live by.

Sure, at least keep a guy who is sane and has decent grooming habits, but the deciding factor on whom to love should not be based solely on the guy’s credentials and his physical attributes.

First Lady Obama would have agreed. When asked what made her attracted to the President, she had this to say:

“It was how he felt about his mother; the love that he felt for his mother; his relationship to women; his work ethic… he wasn’t impressed with himself. And he was funny. And we joked a lot. And he loved his little sister…”

How Women Can Make That First Date Great

First Date- The Signs To Look For In Men

Signs That It Is A Date