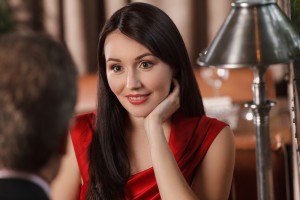 There are certain things that women do that turns men on or turns them off. In the game of seduction, this knowledge can be a great help for women trying to attract guys. There are certain actions that women think drives men wild. These actions are usually influenced by popular culture and the movies. But in reality, they work as a turn off for most men. Here are some of those supposedly sexy tricks that actually have the opposite effect on men.

Too Much Make Up

For women, makeup is a way to enhance their physical beauty. They help make women look more presentable. Using makeup does have a certain effect on men. Using it the right way can be a turn on. But too much makeup is perceived as a turn off by most men. When overused, makeup no longer becomes an enhancer but more of a means to hide a woman’s imperfections and insecurities. Men go for a more natural look in women. If you do need makeup, make sure that you use it in good taste. Use it too much and you will effectively turn men away.

Many women act like a damsel in distress in an effort to make men feel, well, manly. They think that it helps make men feel confident that the women need them. However, this is not always the case. Acting helpless does not always have the same effect on men. Women who do so can be perceived as unintelligent and too dependent. There are many men who do not like to act as a babysitter. They find a woman who can hold out on her own as sexier. Ask help from men only if you really cannot do something on your own. This is a better confidence booster for men, if that is really your intention. You do not have to act helpless on everything to attract those knight in shining armor types.

Advertisements have created a picture of drinking alcohol as sexy. That is why you always see commercials of attractive men and women drinking alcohol on TV, billboards and print ads. That is what they want to project in order to attract sales. But in reality, a woman getting drunk is a turn off for most men. Women who cannot control their drinking can come out as embarrassing. It will not help you attract more men if you drink more alcohol.

Going out in public without underwear can make some women feel sexy. Some think that it also has the same effect on men. Yes, it can be an arousing act, if one does it once in a while. But make it a habit and it becomes a turn off for most men. Not wearing underwear in public on a daily basis can paint women as too loose and wild. Men may be attracted up to a certain point, but most men do not take such women seriously.

advice for women men turn ons sexy tricks turn off turn on
Share !
Previous: Warning Signs Your Relationship May Be Suffering
Next: Living Together With Your Boyfriend

Characteristics That Turn Off Men

Things That Turn Off Guys Women Should Know About

Things That Turn Men Off