Signs You’re on a Bad Date 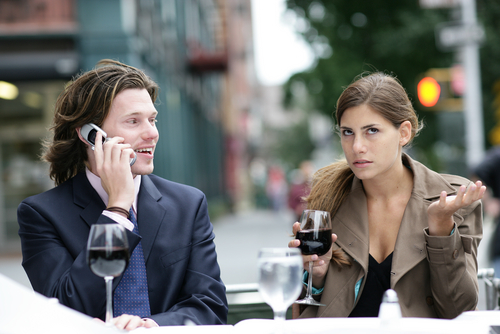 A study revealed that people have more successful dates if they pair up with people who have similar outlooks to themselves.  However, most of us end up with a very wrong type of people when it comes to dating.  Perhaps it is because we feel challenged, or we think that we could change them for the better, or probably even out of boredom.

The truth is that we do not need to put on a role as a sugar mommy, nurse, protector, psychologist among others, when dating a guy.  We need to be ourselves and present our most lovable and romantic side.  However, how will you know that you are dating a guy that has undesirable traits?  Let us know which type of guys to avoid in dating.

Never ever cross that line of dating married men.  Entering into an extramarital affair could not only destroy someone else’s marriage, but it will also affect their children, their careers, financial stability, and your heart.  If you only get to know your date’s marital status later on in the relationship, simply walk out of it.  Do not play games and think that he would choose you over his partner, because even if he does, you will be held severely accountable.

The serial dater is not into romantic relationships, rather considers each date as a challenge to have sex, and you would become his sort of trophy if you give in.  You may become together for several weeks or months, but ultimately you will get dumped for someone whose worth is as little as you are.  One way of telling a serial dater is that they tend to tell you what you want to hear because it would make you easily impressed towards your date.

Whether your date is lying to hide a certain bitter truth or simply wanting to impress you, a liar should have no place in your heart.  The problem, however, is when you have fallen for that other person and you discovered the awful truth about him.  You can try spotting a lie by being suspicious of any out-of-this-world claims and conducting your own background check.  It is important to listen to your gut feeling because if you suspect something wrong, your gut is probably right.

Your date should never be overly jealous and possessive.    He may appear to be meek and humble at first, but he may turn into a vicious green monster later on in the relationship.  If your date constantly asks where you are, who your friends are, and calls too often, then you probably have an undesirable date.

Never date people who have just broken up from a previous relationship and have emotional baggage on their first date.  They may be coming to terms with the end of their previous relationship, but it would be undesirable to hear your date talking about his ex.  You will know when you date is ready for a new romantic relationship.

It may be attractive to have someone who flirts with you all the time, but if he flirts on other singles then that is a problem.  Serial flirters always want to be the center of attention with the other (or same) sex every time you go out.  You may realize that you are being left out as your date flirts with other people in the club.

Another big no-no in dating would be your own boss.  You should never mix professional relationships with romantic bonds as it would only lead to chaotic situations.  Other employees would only see you as trying to sleep yourself to the top, even if you deserve that previous promotion.  Your entire private life would be exposed to the office and you end up being the constant topic of office gossip.