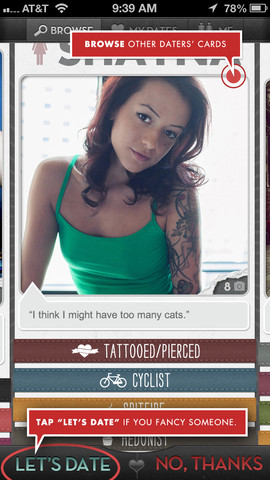 People are dating online more than ever, whether through traditional dating websites or the more recent dating apps for persons on-the-go.

While some dating apps carry over what we usually see on dating websites, such as creating a profile and having to worry about what photo to upload, other apps make the process seem easier and less awkward.

Tinder and Let’s Date, both currently on iOS, work on a similar premise: users receive notifications from other people who express interest in dating them. If both are in mutual agreement, the app connects them for a conversation. The catch is that users do not need to create a new dating profile, as both apps only require signing up using their Facebook accounts.

Tinder claims it has matched over 10 million couples worldwide since its launch in September last year. The app uses your photos on Facebook and you can anonymously browse through other users around your area. If you find someone interesting, the app pushes a notification to the other person. If you are not down with that person, simple dismiss it without them even knowing.

But if both of you hit the “heart” button on each other’s photo, the app connects the two of you and messages can be sent to each other.

Let’s Date (pictured) is a more recent player, having being released last week and only available in the United States. Apart from focusing on just the photo, the app also includes your interests from Facebook, thus providing a broader description of yourself.

Like Tinder, you wouldn’t know if you get rejected by someone who you hope would be a match, but that person can pinpoint in your Dater Card what they do not like about you. This way, the app will learn how to find better matches for you.

Also, the app has its restrictions. It only allows users who have been active on Facebook for a year and have at least 50 friends.

Both Tinder and Let’s Date can be set up quickly, but that does not mean you could find the right one just as fast. Android versions of the two apps are in the works.