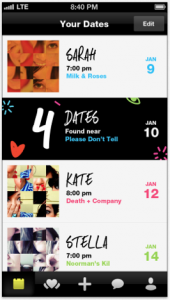 If you think blind dates set up by your friends are crazy, wait until you get into a blind date determined by math.

Popular online dating site OkCupid has launched a mobile app called “Crazy Blind Date,” which sets users up on a blind date in near-real time. The app, available for free on both iOS and Android, is about making blind dates on a short notice. Singles simply choose the nights of the week they want to go out on dates, followed by picking a local venue where they like to hang out.

When that day of your blind date comes, the app searches its database and display users who also have plans on that day. “Crazy Blind Date” pairs you with users whom it thinks (with the help of algorithms) you would be compatible with. Note that their faces are scrambled to give you just an inkling of an idea what they look like. Also, each app is tied to the owner’s phone number in order to prevent fake users or trolls.

Once you have chosen a potential date, a confirmation is sent to both parties. The app then launches an anonymous instant messaging window so daters can find each other at the chosen location. Users can rate their dates afterwards through a ranking system, which awards their dates with credits called “Kudos.” The more Kudos they get, the more chances of getting the best dates in the future.

So what do you think of “Crazy Blind Date”? Have you tried it? Tell us about it in the comments!