How to Spot Someone Who Has a Crush on You? 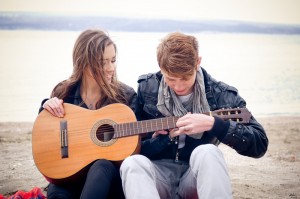 You have met this cute guy at school and he has been very friendly to you ever since. However, you just cannot help but wonder if he is just being nice to you or he actually has a crush on you.

Here are some possible signs someone has a crush on you. You don’t have to check all of them to be absolutely sure; just five or more will do.

He always invite you out to do cool things – The best part about relationships is when you start getting to know each other. One way of knowing one another is to do fun activities together, like playing in a mini-golf course or play board games at his house (just as long as his parents are around). Shared activities create a special bond between the two of you.

He texts you all day about nothing in particular – A guy who has a crush on your would find any reason to communicate with you, texting you about what he is having for lunch or about some random, funny situations he saw on the way to school.

He looks at you way too often – Apart from “Liking” all of your photos on Facebook, he also makes serious eye contact with you. Guys are not into eye contacts even amongst friends, so doing something that is not within their comfort zone is a sign he is trying to capture your attention.

He might act totally disinterested – You might be surprised why that guy in Science class do not seem to respond to you at all. Chances are, it is because he does not know how to behave around you. In that case, if you like the guy, make it a bit easier on both of you and make the first move.

He would probably tease you a lot – Has a boy ever called you a “cabbage head”? Has he wrestled you (gently) along the hallway? Any attempt for him to create some form of body contact shows how he actually likes you.

He surprises you – It may not be roses or chocolates, but it could be as simple as a piece of cookie from your favorite bakeshop, or a limited-edition CD from that indie band you have been hearing lately. Getting s surprise treat from a guy is his way of saying he is listening to you.

He would try to cook for you – If he invites you over for dinner between just the two of you, it is a definite sign he has a crush on you. The meals may not taste like what you have hoped, but at least appreciate his efforts before ordering some Thai takeout.

He definitely shows up on your biggest moments – Whether he attends your cheerleading performance or joins the mosh pit as you play with your band, a guy shows he likes you by giving you their utmost support.

Warning Signs Of An Abusive Relationship